Tomar is a large town with all services and plenty of accommodation options. It makes for a good stopping point and offers a full afternoon of exploring. A climb will get you to the Convento de Cristo, a 12th century Templar castle which is absolutely worth the visit. The other building of note is the Synagogue of Tomar, whose use as a Synagogue lasted from the early 15th century until the Jewish population was ‘recategorized’ as Christian at the end of the century. It was subsequently a prison, a Christian chapel, and a storage warehouse. It now functions as a Jewish museum and is one of a small number of pre-expulsion synagogues still in existence.

Tomar has a rich history connected to the Knights Templar in Portugal. It was their order which saw the construction of the Convento do Cristo, though one suspects it didn’t get that exact name until the Templars were dissolved and the stronghold fell to the Knights of the Order of Christ. Both were military orders, and although the name of the order changed, many of the members did not. Both are buried in the DChurch of Santa Maria do Olival on the other side of the river.

To leave town cross the river over the Marques do Pombal bridge (it is a single lane bridge with a pedestrian path, and you will be going against the car traffic). Turn left at the start of the Alameda, left again onto Joao dos Santos Simaos, and then right onto Avenida Doutor Egas Moniz.

Just past the bullring turn left and then right slightly. Not far ahead you will pass the very prison-like (literally and metaphorically) Infantry Barracks.

The road gives way to a country trail and in a short distance arrives at the locally renowned Ponte de Peniche.

Keep straight at the junction after the bridge, and continue to cross under the IC9, keeping to your left after doing so. It is pleasant country roads through planted forests.

At the first paved intersection (a four-way intersection 3km after passing under the IC9), turn right onto the road. Follow it to the first fork and veer right into Casais. 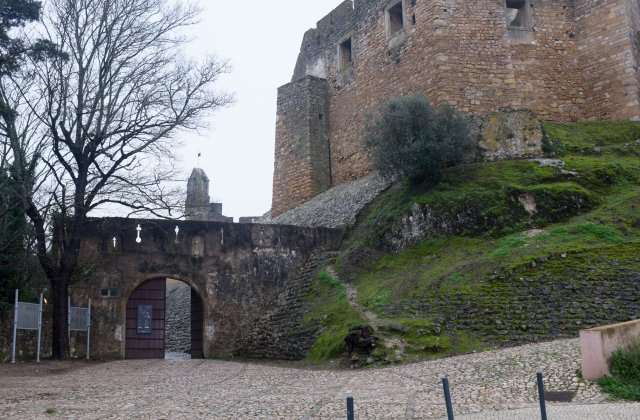 Photo of Tomar on the Camino de Santiago