Valença can be divided into two distinct parts, the part within the walls of the citadel and the part beyond the walls. Unlike most cities with such a defensive structure, Valença is not a city with a fort as much as it is a city within a fort. High up on the hill is a bustling village-town that bears no resemblance to the modernity below.

In fact, there are two forts side by side. They inherit a style from those along the French border that were designed by Vauban (whose prowess for building fortresses was exceeded only by his determination to break into them).

As you walk into Valença along the Avenida de Miguel Dantas, you will approach a large roundabout with a fountain in the middle. From here you have several options:

1. Carry on straight all the way to Spain.
2. Carry on straight but turn left up the ramp to the Citadel shortly after, exiting the citadel towards Spain on the other side.
3. Turn left towards the Albergue São Teótonio, along the Avenida dos Bombeiros. The albergue is close to another entrance to the citadel.
4. Go in search of other accommodation elsewhere in the city, mindful that some are up inside the citadel.

Option number three is recommended, allowing you to enter the citadel from its southernmost door.

The most important monuments within the walls are: The Capilla da Misericórdia, with its polychromatic retablo, the Iglesia de Santa Maria dos Anjos, the Iglesia da Colegiada o de Santo Estevāo, a 1st century Roman Milario, the statue of Sāo Teotónio, Portugal’s first Saint, the Capilla do Bom Jesus, and the Capilla do Senhor do Encontro.

Apart from the monuments, there are numerous places along the perimeter where you can enjoy the view of the river and the shade of a tree.

Change the time on your watch/phone/sundial/wind-up alarm clock. Spain is one hour ahead, so assuming you wake up at the same hour as the day before you will find things to be darker than usual.

TIP: Cross the bridge using the walkway that is on your right, not the more naturally accessible one on the left. You will have much better views of Tui this way. 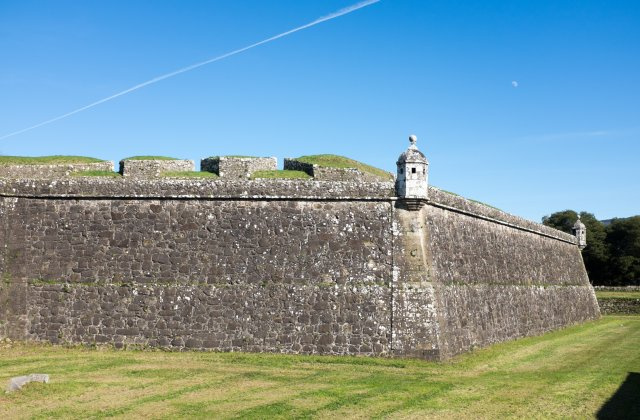 Photo of Valença on the Camino de Santiago