Lisbon is the largest city along the Camino Portugués and only a few others compare to its size and sprawl and splendor. The city itself is full of award winning hostels and countless hotels for you to spend your first night in.

By European standards, it is a small capital and is easy to get around thanks to a quality metro and tram system; but truth be told the best way is to set off on foot and explore. The exception to this would be to visit the Belém District (Belém Tower and the Jerónimos Monastery) which is best reached by tram 15.

Knowing the basic topography of the city, and the names of the different neighborhoods will help you to navigate and choose accommodation. The three most important parts, from west to east, are the Bairro Alto, Bairro da Baixa, and Alfama.

The Bairro da Baixa (lower), recognizable for the grid-like pattern of roads which are the result of the city's redesign subsequent to the earthquake of 1755, sits nestled between the Alto and Alfama. It is pedestrian friendly and is chock full of small cafés and large public squares.

To the west, is the Alto where you will find the Basílica dos Mártires , one of two churches where you can pick up a last minute pilgrim credential.

To the east is the Alfama, dominated by the Castelo de São Jorge and location of the Sé Cathedral (the other church which has credentials on hand) and the starting point of the Camino.

Before you set off be certain to pick up a pilgrim’s credencial if you have not already done so. It can be found at the Basílica dos Mártires and the Sé Cathedral. This accordion-fold booklet is your passport to the camino and will become your most cherished souvenir of the trip. It is a required document in most pilgrim-specific accommodation, earns you pilgrim prices in many museums, and will serve as proof of your journey when presented to the Pilgrim Office in Santiago if you are planning on getting your Compostela Certificate.

It is Saint Anthony of Padua that brings the Portuguese out to the streets, every June on the 13th.

Lisbon has been a populated harbor since the Phoenician times, but it was the Romans that made the biggest impact. The area was incorporated into the Roman region of Lusitania, an area which covered the whole southwest of the Iberian Peninsula, following the defeat of Hannibal. The network of roads that connected it with the cities of Porto, Braga, Astorga, Lugo, and Mérida have been incorporated into new roads, and between here and Santiago there is an abundance of bridges and cobbled ways that hearken back to the 1st century.

The Patron Saint of Lisbon is Saint Vincent of Saragossa, and although his remains are held in the Sé Cathedral you won't find that the Lisboetas do much for it. This is not the case in most places, where even a passing connection to a Saint merits a day of celebration and where the possession of relics merits several days of observation and festivities.

Museu Nacional do Azulejo: You will pass the museum on the way out of Lisbon just a few kilometers from the Sé Cathedral. The blue and white tiled art form, so very characteristic of Portugal, was brought here from Spain in the early 16th century. It was a style that originated with the Arab population of Sevilla as a way to imitate Roman mosaics, and to overcome the Moorish tradition that holds a fear of empty spaces. The Portuguese did the same but quickly changed the mosaic patterns for more figurative themes which allowed them to use the tiles as pieces of a canvas which seem limited only by the size of the building on which they are placed. With the perfection of the technique, the styles represented followed closely the broader influences of the day and it is possible to find examples of the form from Rococo to Art Nouveau.

The way from the Sé Cathedral is straightforward and well-marked, with the first arrow being located on the lower right of the facade. Between here and the Parque you will pass a few notable waymarks, including the Museu Nacional do Azulejo. A large portion of this city walking can be eliminated by taking the metro to the Oriente station located near the Parque; and from there it is also possible to take a commuter train to Sacavém, Santa Iria, Póvoa, Alverca, or Azambuja. 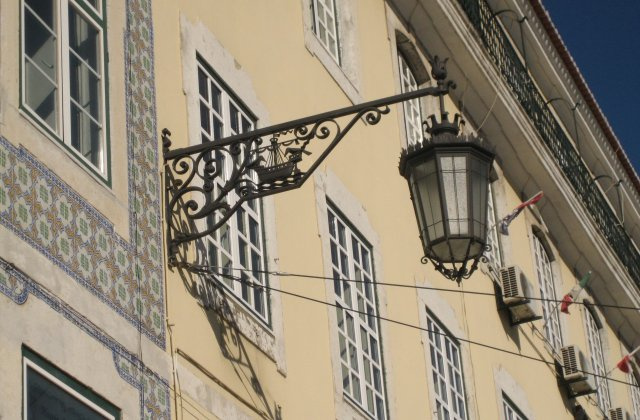 Photo of Lisboa on the Camino de Santiago