Finisterre is the end of the world, and for anybody walking west, the beginning of the end. From the city center only 3km remain to the Cabo (lighthouse and restaurant). On the other hand, 31km remain for anyone wishing to turn North and continue to Muxía. The tourism office, just up the road from the Xunta albergue can provide you with the official document, the Fisterrana, declaring your completion of the walk. You are advised to have all of your stamps in order, for they are on the lookout for anybody who might have taken the bus.

This is the sort of place where salty air mixes with cheerful rendezvous and pilgrim farewells. Pilgrimage to this point, the most westerly point of continental Europe, predates that of Santiago. As unique as this might make it, Finisterre has managed to maintain a low profile. The harbor restaurants, now enjoying their recently rebuilt environs, continue to do grilled sardines and pimientos de padrón the way they always have.

Bus service returns to Santiago from in front of the municipal albergue several times daily and is easy to sort out. The schedule is posted at most albergues. Be mindful of the phrase "Enlace" which indicates a change in buses along the way and a potential delay when traffic is heavy. The drivers are serious fellows, and not very talkative. If you find yourself standing with a group of people on the side of the road, unsure of what is going on, be patient. If you are in more of a hurry, taxi service can get you back to Santiago as well.

Lastly, but perhaps most importantly, is a quick geography lesson. Contrary to perception, the walk to the lighthouse is actually Southerly. The beach approaching Finisterre, the Playa Langosteira, faces East. This puts the setting sun, and nostalgic glances towards home for North Americans, on the other side of the peninsula; a little over 1km from the municipal albergue. If you fancy a plunge into the Atlantic, naked or otherwise, the relatively private beach there will oblige... just saying. If you go, be extremely mindful of the strong currents which will quickly pull you from the beach when the waves roll in. The beach is unmonitored.

For those of you wishing to continue onward to Muxía, I have separated the notes and put those into "San Martiño de Duio." The elevation profile as well begins there.

The official certificate of completion, known as the Fisterrana, can be obtained at the tourism office. You are advised to have all of your stamps in order, for they are on the lookout for anybody who might have taken the bus.

The biggest fiesta in Finisterre is Holy Week, when many thousands of Galicians descend on the village to take part in the celebrations and processions. If you plan to arrive during this time do book a room in advance. Nuestra Señora del Carmen is celebrated from the 8-10th of September.

The most famous son of Finisterre is simultaneously its most obscure. Alexandre Campos Ramírez, also known as Alejandro Finisterre, was a poet and inventor born here in 1919. He was injured in the battle for Madrid during the onset of the Spanish Civil War and was evacuated to the hospital in Montserrat. A similar fate had led Ignatius of Loyola to the same place 4 centuries earlier and although Alexandre didn’t go so far as to pen his own Spiritual Exercises he did manage to dream up the design for the first foosball table.

TO MUXÍA: The route to Muxía has matured over the last five years, but services along the 29km stretch way remain scarce. Lires and Frixe both have bars, and Lires has a few guesthouses if you wish to split the walk into two days.

To find the way to Muxía, head back along the road you came in on. At the cruceiro that marks the end of the beach stay on the road. It curves left at the cruceiro, and then curves right. Turn left (uphill) at the second street when you get to the first signs indicating the way. Between here and Muxía you will find the new markers installed in pairs and indicating the ways to Muxía and Finisterre, and you will also find double ended yellow arrows with M and F on either end.

The walk is along paved road from Finisterre to San Salvador, but from there it joins a gravel trail for most of the way, only joining paved surfaces as it passes through the smaller villages. 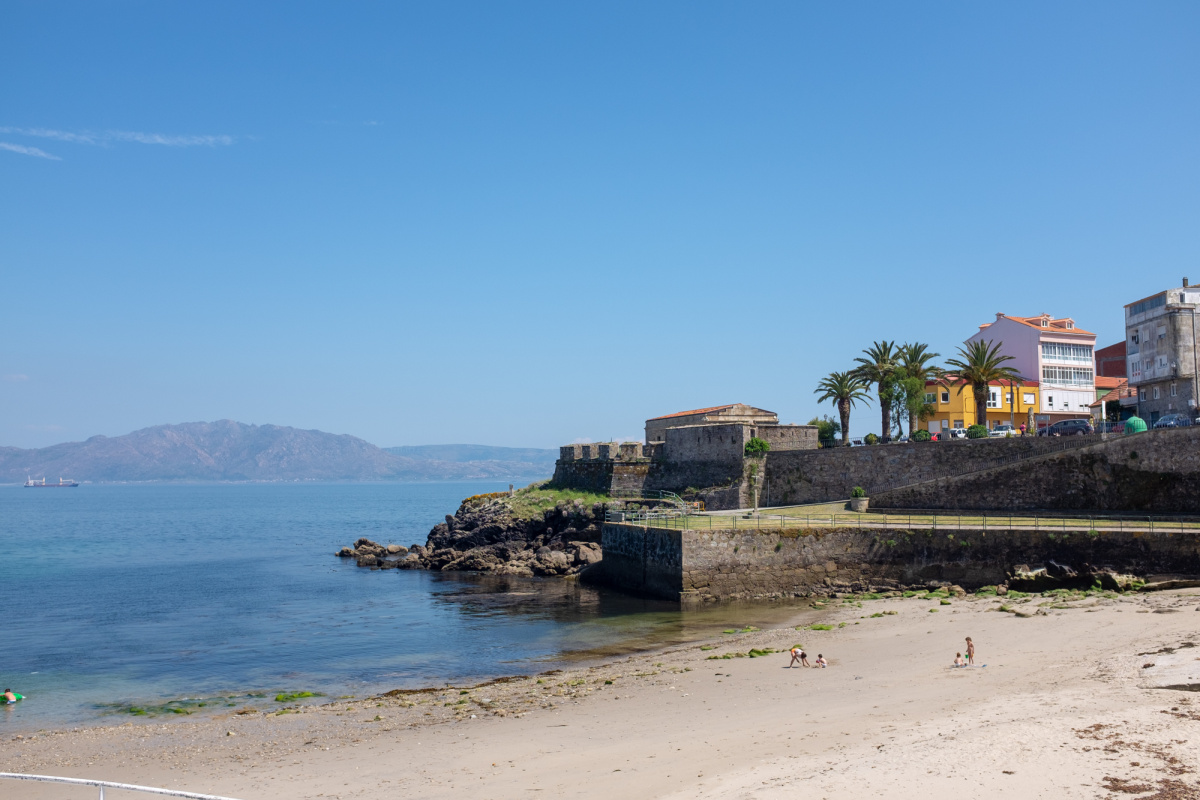 Photo of Finisterre - Fisterra on the Camino de Santiago

The same great content and more in your pocket, the most up-to-date guidebook to the Camino Finisterre & Muxía available.

The same great content and more in your pocket, the most up-to-date guidebook to the Caminos to Finisterre and Muxía available.