Quiroga is located in a beautiful valley of vineyards and orchards. All services.

Lots of cafés and restaurants. The one Quiroga eatery that receives consistently high praise is the Restaurante Aroza. It is off the main street and near the Plaza Mayor. Their menu del día at 10€ with good wine included is a bargain. Their tapas are also excellent. Closed on Sunday evenings.

For breakfast, the Panadería Marisa opposite the albergue opens at 8 am.

For the next day’s walk, your choice is to go from Quiroga to A Pobra do Brollón (23 km) or to Monforte de Lemos (35 km).

Bring water. There are two fountains before A Pobra, one in Carballo do Lor, and the other in Castroncelos, which is practically in A Pobra do Brollón. The trail from Quiroga to Monforte de Lemos is long, and services are short along the way.

Leave Quiroga following the waymarks westward along the main street. Cross under the N-120 and follow the country lane (LU-933) paralleling the river. The arrows take you across the river on a bridge (keep going straight if you don’t want to go through the little village of San Clodio with its bar that opens very early). If you cross the bridge, you go through San Clodio, where Quiroga’s train station is located, and through its small commercial area. You then go back over the river on another bridge and continue on the right side of the river.

Continue along the N-120 for several km. Cross the highway at the mojón.

The path rises over the little town of Noceda. You will be on a grassy shoulder along the LU-933.

After an ascent from Noceda, an arrow takes you off onto a dirt track, to the right. It is well marked and easy to follow. At the top, the Camino merges with the PR-G141, a local hiking trail that is marked with yellow and white signs. There is a lovely descent through an old growth forest and along pretty streams.

At the intersection of about five dirt roads, you see a chapel straight ahead. The Camino mojón and PR trail markers go past the Capela dos Remedios (Chapel of the Remedies). Soon after, the PR trail diverges from the Camino. PR goes to the left, while the Camino keeps going straight. There is a sign and also an arrow. Keep straight down to a small hamlet, Carballo do Lor. A sign points off-Camino to a fountain/lavadoiro (a lavadoiro is an old outdoor clothes-washing place) about 30 meters to the right before you start going down.

The Camino now coincides with another hiking trail, the GR-8, which is well marked with red and white blazes. Turn left at signs pointing to the very tiny hamlet of Trampillo, where a young farmer has remained indifferent to the pleas of many pilgrims that he remove his angry dogs. The dogs are chained to the house and leave ample room for pilgrims to pass, but it can be intimidating.

You enter the beautiful little place off Barxa do Lor with a bridge (Roman? Medieval?) over the river. Good Camino marking. This is the end of the first ascent and descent of the day.

The Bridge at Barxa do Lor is mentioned in a document from 1566, which again seems to confirm the route’s Camino bona fides. It involves a discussion by the village residents about the cost of repairing the bridge. The letter explains that the bridge’s arch had fallen and was causing harm to the pilgrims passing through. It also notes that pilgrims are exempt from the toll to cross the bridge. The document also mentions the importance of the route as an alternative to Santiago during the winter time when snow covers the mountains of O Cebreiro. Just as the Invierno defenders have always asserted!!

The second ascent of this stage now begins. After the first hamlet, the red wooden sign for another trail goes off the paved road to the right. If you plan to stay on the camino, keep climbing on the paved road (you will see an arrow on the street soon). If you stay on the Camino, ascend to a fork in the road with a cell tower in the middle. As the descent begins, a mojón takes you off to the left (while the main logging road keeps going up).

As you cross a paved road before entering Castroncelos, you will see the sigh pointing to Salcedo. After Castroncelos, stay on the main road, past the turn off for Piñeros. Arrive in Vilarmao at a farm, turn right towards Reguengo. This takes you into the town of A Pobra do Brollón. There are two cafés on the main road, which is named after the fascist leader José Antonio Primo de Rivera. The town of Pobra marks the end of the second up and down, only one more to go before Monforte de Lemos. 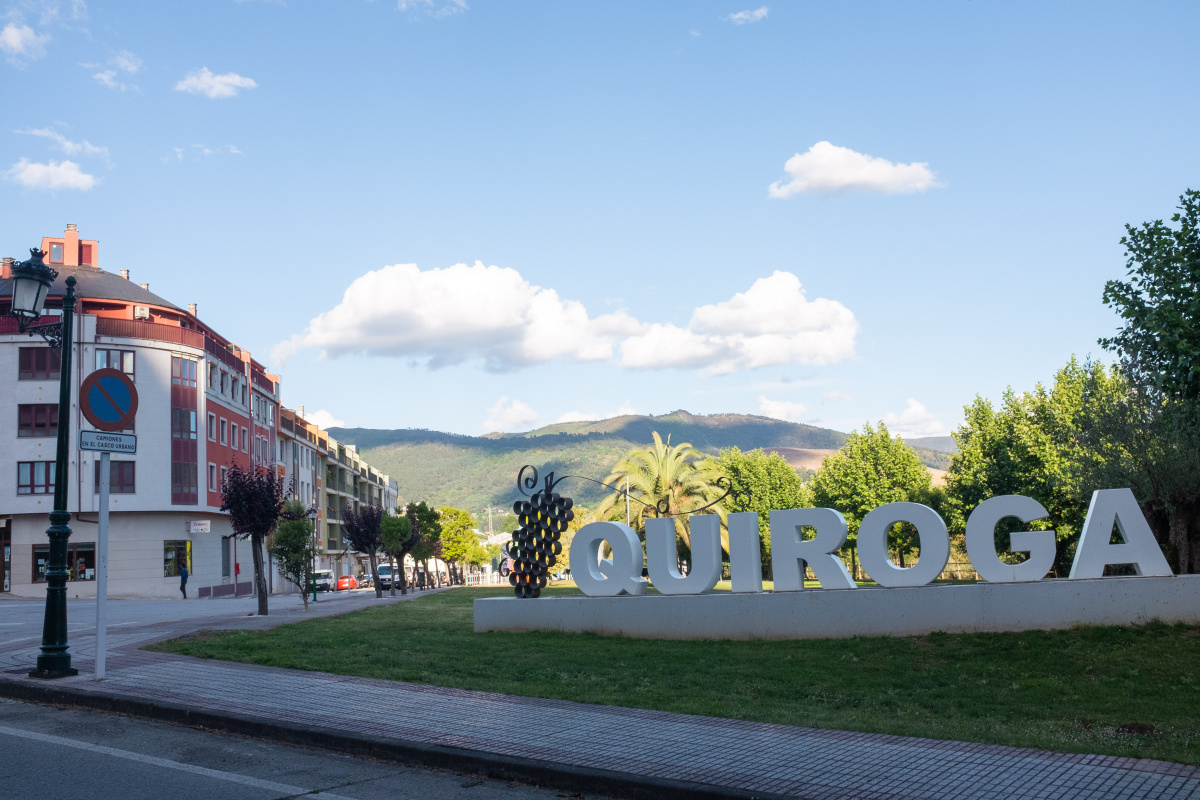 Photo of Quiroga on the Camino de Santiago