The Las Médulas cultural area has been named a World Heritage Site by UNESCO. It was at one time the most important gold mine of the Roman Empire, and a long stretch of the Camino Invierno follows a road built to transport minerals out of the region. Along the river you will still see remains of Roman mines alongside their modern counterparts. Las Médulas, an environmental holocaust two millennia ago, is now a spectacular, spooky assembly of deep-red cliffs and valleys, with wooded parkland and pathways threading in between. Essentially, the bare earth mounds and crags you see are the “innards” of what used to be hills. By channeling water through increasingly narrower tunnels, the water speed and force increased. Thus, the Romans were able to blow open the hills to extract the gold. Las Médulas is a popular summertime tourist attraction, with all the joyful merriment and price-fixing that goes with it.

A little linguistic/political debate: Contributors to the guide could not agree on whether to use the Galego “As Médulas” or the Castellano version, “Las Médulas.” Since the town and site are in Castilla y León, the “Las” may be more correct (though perhaps less “politically correct”), and that is what you see on the signs. Not wanting to wade into that debate, at the last minute I changed all of the occurrences of “As Médulas” to “Las Médulas. (Please note, this is my feeble attempt at humor, but it does serve the serious purpose of alerting you to the fact that this little debate over whether the article should be “las” or “as” serves as a proxy for a much more serious disagreement over regional identity). Pilgrims report that everyone in town uses the “As” rather than the “Las”.

Las Médulas has two tourist information centers (one at the entrance to the village on the right, and another in the village itself, close to the church), accommodation, cash machine, bars, grocery store at lavadero, and restaurants targeting weekenders hiking the many trails around the area. Its small museum is well worth a visit. One pilgrim reported that the man at the first interpretative center speaks English and gave a very good description of the history and technology of the mines. The visitors centers are open every day of the week; the galleries close on Tuesday.

You can also pick up a map describing various walks around the site. The absolute best place to go for a view is the Orellán lookout. There are several ways to get there. We unintentionally took the 6 km route, so be careful when following the map. The shortest way to Orellán is to go to the hotel complex Agoga, and take the road on the LEFT side of the complex. That will take you to the turn-off for the slightly steep but beautiful pedestrian path up through chestnut forests. When you are at the top, turn left, and you will soon come to the large lookout area. A little beyond the mirador Orellán, there is an entrance to one of the galleries and you can walk through the tunnel channels that water was pumped through. Kind of spooky fun! http://www.galeriaenlasmedulas.com/ Whether you have time or interest for the gallery tour, do not miss the view from the Orellán overlook.

Las Médulas has several accommodation options and numerous places to eat. In off-season, though, your selection is likely to be reduced. In addition, several pilgrims have noted that on Tuesdays, many places are closed.

Eateries include Bar Reigo, Taberna Romana, O Camiño Real (described by one pilgrim as “bohemian but pilgrim-friendly”), and Restaurante Marif. Some of these may be closed out of tourist season. Of those eateries, O Camiño Real gets consistently high reviews.

Leave Las Médulas on a tractor path on the western edge of town that leads to a beautiful morning walk through wooded hills. There is the possibility of a short detour to the left (perhaps 500 meters) to a ‘mirador’ with good views back over Las Médulas and the Bierzo valley. This is not the Mirador de Orellán recommended in earlier paragraphs, however, and the views are not quite as spectacular. Though a sign at the top of the ascent tells you that Puente de Domingo Flórez is only 5.7 km away, don’t believe it. It’s actually 2 km more than that! The Camino descends along a mountain lane with views across the valley to distant mines and villages. The grade, the surface, and the views are very nice all the way.

The Camino goes into Puente de Domingo Flórez on the Calle Real. It takes you across the river, then along the river, and then back over the river and into the more central parts of town. This is an unnecessary loop, but it will get you through. You can avoid the loop by ignoring the arrows and taking a straight shot across town. As you are descending on the Calle Real, look for the Calle el Toral (on your right before you get all the way down to the river). Turning right here will take you to Café Bar Los Arcos before the square. There is a churrería in the main square. Keep walking straight, and you’ll come to Bar el Cruce (very pilgrim friendly) and will be back on the Camino and on Avenida de Orense. The Camino continues on Calle Chao de Marco, a left turn off Avenida de Orense.

If you have taken the loop, the bridge into Puente de Domingo Flórez continues on the National Highway (N-536), called the Avenida de Orense in town. It swings to the left, with the Banco Pastor on your right and a pharmacy on the left. 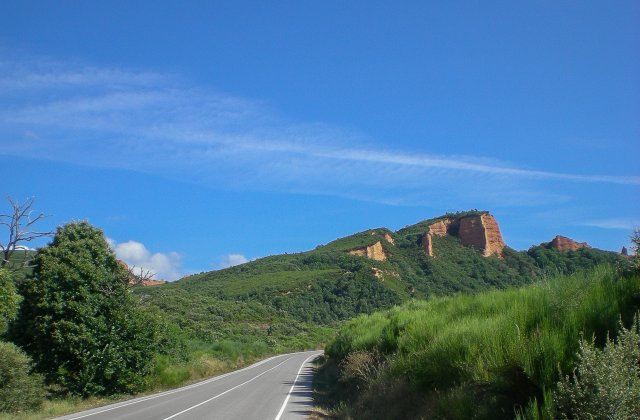